Insurance is misunderstood. Consumers ascribe malice where often practical restrictions are to blame.

Take deductibles for example. A deductible in an insurance claim decreases the number of claims an insurer has to deal with. More than that though, it reduces the claims where the administration costs of checking out the claim and paying it are large relative to the benefit to the policyholder. Sometimes these costs would have been larger than the claim itself.

In that case it does not make sense for the insurer to be processing and paying the claims – the increase in premiums required would be more than reasonable to policyholders.

Lemonade’s new “zero everything” removes the deductible and guarantees no premium increases for up to two claims per year. The reporting on this innovation has generally been silent on the practical reasons why this is hard for traditional insurers and easier for Lemonade.

Lemonade on the other hand explicitly recognise (or at least claim) that due to their AI-based claims underwriting process they can drive down costs and therefore manage small claims cost effectively.

This is important. Many complain about the lack of innovation in insurance. Removing deductibles isn’t innovation. Reducing costs to the extent it becomes viable is the step that enables differentiation and better value for customers.

This is premature for a book review as I’m only on page 3 or something. The book:Insurance and Behavioral Economics: Improving Decisions in the Most Misunderstood Industry

has been recommended to me a few times. (Okay, twice by the same person, but that also actually says something.) I’ll work my way through it and give you my views.

But this XKCD reminded me of the ubiquity of behavioural economics everywhere in life. 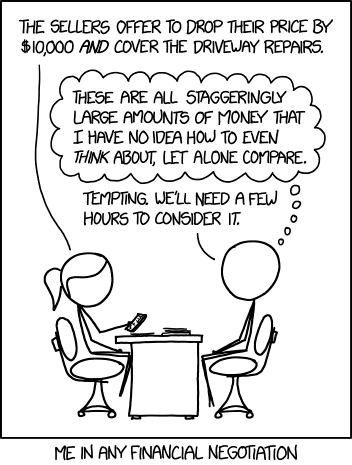 Non-life claims reserves are regularly not discounted, for bad reasons and good. This part of the series looks at the related issue of inflation in claims reserving. (You’ll have to wait for part 3 for me to talk about the analysis that prompted this lengthy series.)

In many markets, inflation is low and stable. Until a decade ago, talk of inflation wouldn’t have raised much in the way of deflation either. That’s still sufficiently unusual to put to one side.

Low, stable inflation means that past claims development patterns are mostly about, in approximate descending order of importance (naturally depending on class and peril) END_OF_DOCUMENT_TOKEN_TO_BE_REPLACED

I’ve had the privilege to straddle life insurance and non-life insurance (P&C, general, short term insurance, take your pick of terms) in my career.  On balance, I think having significant exposure to both has increased my knowledge in each rather than lessened the depth of my knowledge in either.  I’ve been able to transport concepts and take learnings from one side to the other.

Discounting or fiddling with inflation has some obvious implications for analysing actual vs expected analysis, reserve run offs, and reserve adequacy analysis. That some non-life reserving actuaries trip over because it’s more natural in the life space.

But, first, why are non-life reserves so often not discounted? There are several reasons typically given: END_OF_DOCUMENT_TOKEN_TO_BE_REPLACED

I love to read, so I’m not proud to admit right upfront that everything I know about “Love in the time of cholera” I learnt in 3 minutes from wikipedia starting about 3 minutes ago. Seems like a book I should read.

But another than playing on the well known book and movie title, this post has nothing to do with the book.

It has everything to do with cholera. And the very real possibility of a cholera or similar disease outbreak in Cape Town in the next year. Here is a little superficial analysis of the numbers.

The City of Cape Town has gone from claiming unequivocally:

“we want to give the people of Cape Town an assurance that this well-run city will not run out of water.”

If consumption is not reduced to the required levels of 500-million litres of collective usage per day, we are looking at about March 2018 when supply of municipal water would not be available.

CT has been stuck persistently above 600Ml (million litres) per day for an extended period and this is down from a peak of 1,200Ml per day in January 2015. The low hanging fruit are long gone. I do not see how we will decrease consumption by another 20% (since we’re over 600Ml at the moment) and this therefore suggests we will run out of water.

END_OF_DOCUMENT_TOKEN_TO_BE_REPLACED

Bancassurance, says the oracle or finance definitions online (aka Investopedia) is :

Bancassurance has been a major part of European and Asian insurance markets and, for a time, was presumed to be the future of insurance distribution in most countries around the world.

What happened was different. Bancassurance has not taken off in all markets the same as it did in the early success stories. Some of this has to do with the reversal of trust relationships between banking and insurance. END_OF_DOCUMENT_TOKEN_TO_BE_REPLACED

If you haven’t heard about CRISPR and CAS9, you won’t understand why I say it seems likely that my children will be the last in my line that are “pure natural” descendants. My grandchildren will almost certainly be genetically altered in some direct way due to the explosion of genetic manipulation possibilities just beginning to open up.

Insurers have long worried about the costs and ethics of genetic testing. The time to start considering the impact of annuitant mortality is probably already in the past. The possible improvements in life expectancy are, according to some, literally unbounded.  I don’t quite go that far yet, but the possibilities are provocative.

In another post, I’ll discuss my concerns around antibiotic resistance, and other risks to mortality, but for now, do yourself a favour and watch this crash course in the possibilities of cheap genetic editing.