Actuaries need to update estimates, contribute to the discussion on appropriate bonus levels and help make calls on new and existing products and pricing. There is usually more than enough uncertainty and we’ve developed a set of tools and heuristics and ways to go about this under normal conditions.

What happens when the conditions are nothing like normal? When changes are happening weekly rather than by the decade, and when the past is no longer a reliable guide to the future?

Covid-19 isn’t the only cause, but it is the sharp end of the wedge for the moment. It doesn’t help at all that Covid-19 also makes it more difficult to reach out for assistance and sharing ideas between actuaries.

The Actuarial Society of South Africa has put out a document outlining some considerations that may apply, to help guide actuaries in making these difficult decisions.

What does Business Rescue mean for credit risk, ratings and cross-default?

Business Rescue precludes creditors from applying for liquidation of the business. This is the removal of an existing right of lenders: “a temporary moratorium on the rights of claimants against the company or in respect of property in its possession”

From what I gather it’s not clear that this formally counts as default – might depend on specific loan or bond terms and how credit rating agencies respond to this.

How one “feels” about this is less relevant than the legal interpretation for cross-default provisions. It certainly feels like default to me.

For SAA, it’s also a step which means the government is no longer prepared to keep putting in money. That’s certainly a message about how likely any implicit (rather than explicit) governmental guarantees are for other entities.

Short aside on government debt and balance sheets

It’s not really so much that this is bad news, but rather this is the long-overdue recognition of how bad the news is around SOEs and their total contribution to the true Debt/GDP and their zero or negative contribution to the less-publicised Asset/GDP ratio. As I’ve mentioned before, another useful ratio would be (Debt-Assets)/GDP, which if measured carefully can be a more useful measure of the true financial position of a country and a better guide for decisions on whether to privatise an existing SOE.

A full balance sheet approach and one that considers return on capital (as well as also-important social-development, second-order, longer-term and positive externality items) should form a greater part of policy decisions.

Infrastructure as an asset class is hardly a new idea. Retirement funds are attracted to the promise of higher turns, long-dated cash flows, and consistency with increasingly important ESG factors.

Insurers, unlikely retirement funds, have to hold risk-based capital against the risks inherent in their investments. This makes it more difficult to underestimate the risks and services as a deterrent to large allocations.

Infrastructure assets can play a part in linked funds for life insurers, where the investment risk is passed straight back to the policyholders and no market risk capital is held by the insurer.

Under this policy construction, the risks can be similar to a defined benefit retirement fund. These include the practical challenges of pricing and valuation, and conduct and fairness issues of managing investment and divestment prices, liquidity with large withdrawals and transparency of pricing.

These liquidity constraints also make this a poor investment for non-life insurers or smaller life insurers, especially where they primarily write risk business.

Where are alternative assets used in insurance?

The three areas where infrastructure assets have a meaningful place to play in insurance are:

END_OF_DOCUMENT_TOKEN_TO_BE_REPLACED

I love analogies. As analogies go, many things are well approximated by the “toss of a coin”. Gender at birth is not. And it’s not for two reasons, only one of which you can probably guess.

There are several postulated reasons, including generally higher mortality of males, but also under-registration of female births, and sex-selective abortion and infanticide of female babies. Both of those last two could be attributed to China’s one-child policy. China’s ratio is still 1.15:1 compared to Sierra Leone at 1.018. (Zimbabwe is close to bottom at 1.02 with South Africa not much greater at 1.03.)

The second reason gender at birth is not a coin toss is less well known. The gender of a child is not independent of the gender of the previous child. The impact is small and best-studied on (non-human) animals. One thought is that the “condition” of the mother has an impact on the gender of the child. Other possible factors include frequency of intercourse and paternal age.

END_OF_DOCUMENT_TOKEN_TO_BE_REPLACED

The US market is expensive. Less expensive than it was a few days ago before the yield curve inverted and the S&P500 had several days of large losses, but expensive still. But how expensive is it really?

The Cyclically Adjusted Price Earnings (CAPE) or Shiller PE ratio is 28.5. Although this is down from January 2018 where it stood at 33.3, the only other time’s it has been this high was in January 2000 (followed by years of poor returns) and Black Tuesday (of Great Depression fame.)

Still, none of this is really good news for future performance on the S&P. However, is the situation really as dire as it seems? What impact did the 2008/2009 earnings period have? Do the extremely low interest rates in the US have a part to play here?

END_OF_DOCUMENT_TOKEN_TO_BE_REPLACED

“My voice is my password” and similar phrases have begun to be used for secure voice authentication for banks and health insurers and other critical services that require security and privacy.

It’s likely that several of your own service providers will roll this out in the next couple of years. Progress, right?

The problem is that in the short time since voice identification models have become mainstream and slick enough to be used in call centers, voice spoofing technology has exploded. It is now trivial to create voice tracks saying whatever you want them to say without human ears being able to tell any difference, and increasingly, fooling the voice authentication models too.

Worse, we are probably only a few years from trivial video spoofing with the same qualities.

I support the idea of moving away from passwords and improving security, but I struggle to understand how voice authentication is anything other than a tiny blip in the timeline before it becomes the easiest vector for fraud yet.

Setting discount rates is a crucial and subjective exercise. This is true for life insurance embedded values too.

Many researchers are comfortable with a range for Equity Risk Premiums of between 3% and 5%. Many corporate finance practitioners use a range from 5% to 8% or even higher. My nearly eight-year-old blog post on mis-estimating the ERP covered these differences in detail.

This post is a little different. Forget about what theory says, what are the implications of using a high risk discount rate (RDR) when calculating embedded values and then trying to maximise value.

END_OF_DOCUMENT_TOKEN_TO_BE_REPLACED

I have never owned Steinhoff shares. I was surprised then, when going through some old blog uploads (dealing with a separate copyright issue that I may touch on in another post) to find this share price graph of Steinhoff from 2007 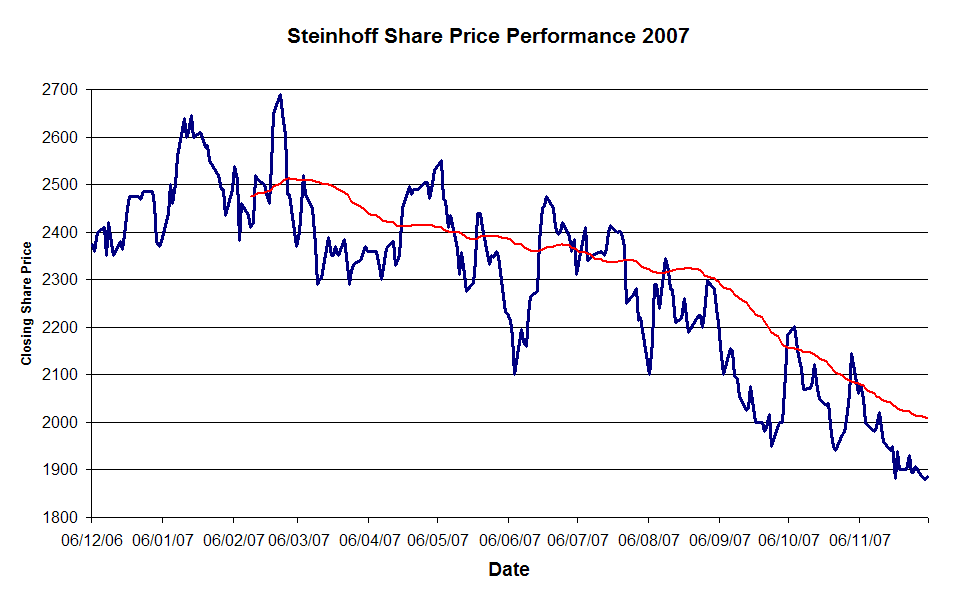 I don’t remember looking at this, but the blog entry was actually about insider trading and the information content of directors’ dealings. Here is a quote showing some wisdom and a near miss:

Having said that, I pay careful attention to knowledgeable insiders when they put their money where there collective mouths are and vote with their personal wealth and risk appetites that a company is a good bet.

I never sufficiently understood the fundamentals of the business and how it related to their accounts and valuation. Score one for then not investing.

However, I was also saying that I saw value in following directors’ dealing and possible positives from directors investing in their own stock. In the case of Steinhoff, it’s hard to separate out:

I have less time for fundamental analysis these days so low cost trackers is more my flavour. Given my mixed success in the past, perhaps that’s just as well.