South Africa should have some lessons to teach here. We have enough experience to expect some insights. Sadly, I’m not sure we’ve done much except become accustomed to it.

Long-term unemployed – one definition is those who have been unemployed for longer than 27 weeks – increasingly find themselves unemployable with stale skills, stigma and demotivation driving them out of the labour force.

A Brookings Institute paper talks to the greater problem that even on returning to work, the long-term unemployed often find themselves unemployed again.

only 11 percent of those who were long-term unemployed in a given month returned to steady, full-time employment a year later.

The paper and related videos and infographics are worth a read.

Another telling statistic is, that for a given month (between 2008 and 2012), of those who were “long term unemployed” a third were not considered part of the labour force 15 months late. They’d stopped actively looking for work. Barely more than a third work employed and many of these didn’t have regular, full time work.

If you’re South African, this should sound horribly familiar. Even with our idling economy, those unemployed with skills and recent employment will probably find a job fairly soon. There are plenty of areas where filling positions is hard. We have upward pressure on wages across the board for skilled, semi-skilled and even unskilled workers. A combination of imported inflation, pressures and intentions to decrease wage gaps, powerful unions and restrictive labour laws mean that the long-term unemployed are left well by the wayside even while wages tick higher. 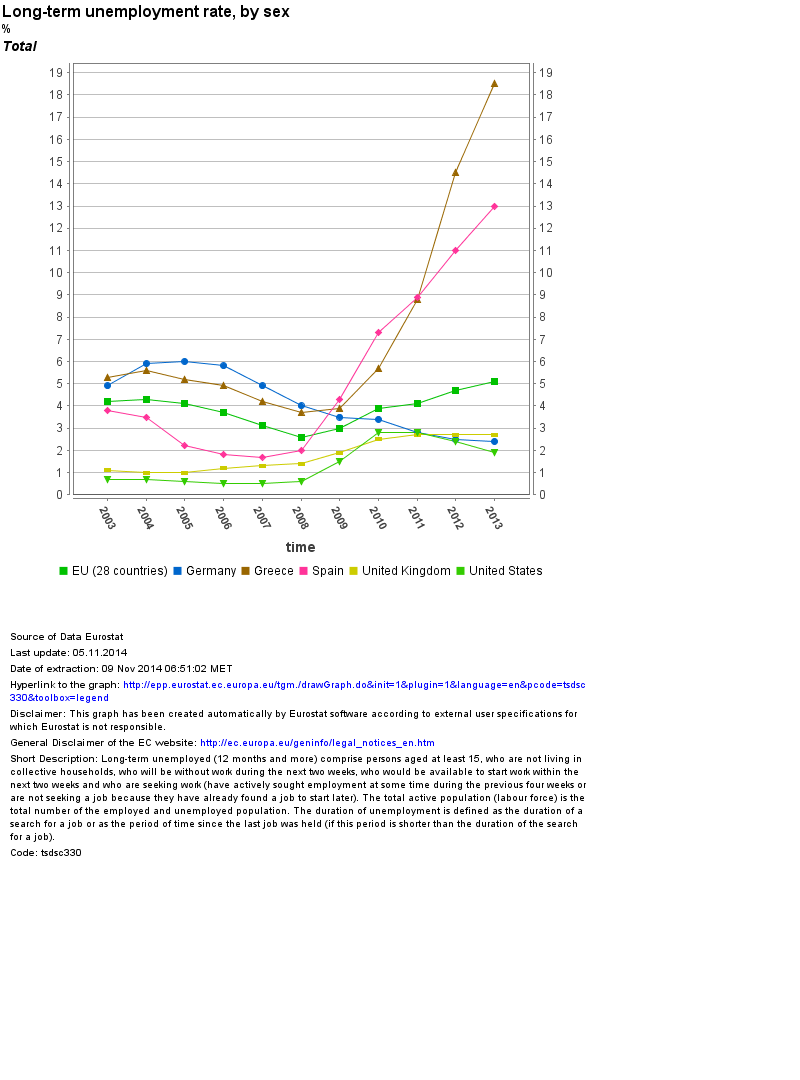 In the US, long-term unemployment rates are coming down but are well above their long-term averages. Part of this decrease also reflects exits from the labour force as unemployed stop looking for work. The graph above shows the scale of the problem in Greece and Spain and the fairly remarkable recovery for Germany.

From the Brookings paper by Alan B. Krueger, Judd Cramer, and David Cho of Princeton University:

Past research has found that the longer a worker is unemployed, the less time they spend searching for a job, the fewer job applications they submit, and the less likely they are to be called in for an interview for the jobs to which they do apply.

Again, this perfectly describes a South African between the ages of 18 and 25 without matric or even with matric and no further education struggling to find work.  Too many of these are being supported by parents and grand-parents.