South Africa’s unemployment is a different creature from that in the US and in the developed world’s papers at the moment. We don’t have a cyclical lack of demand (although demand isn’t as robust as I’d like).  We have massive, unmanaged structural unemployment in large sectors of the economy.

I say “in large sectors of the economy” because it isn’t true to say that we have universal unemployment. In fact, a feature of structural unemployment is that it usually is not uniform throughout the economy (like cyclical unemployment often is).  I don’t know any actuaries or engineers who are unemployed for more than a brief period between jobs, and usually the jobs start and end back to back. There will be other examples too.

Unemployment is driven by education

Interesting that 75% of our unemployed are “unskilled”. (I heard this on the radio, so I don’t know that  the number is correct or it’s source, but it does map to my previous analysis based on census showing unemployment by education level attained.

Economic growth isn’t the only solution to unemployment; in fact it’s not even necessarily a solution.  Prior periods of strong economic growth added jobs only very slowly. We have massive, structural unemployment in this country. We are making some of the right noises with our government’s new jobs plan and jobs fund.

Education in South Africa is not performing as needed

However, given the obvious relationship to education, why don’t we take the problems of our education system seriously?

TIMSS 1999 Rock-bottom in Maths and Science. 6 provinces results went backwards in Maths and Science. The DoE’s report indicates that our syllabus has the least overlap with the TIMSS assessment framework – this offered as an excuse for poor performance (which it is) but without even considering that maybe that is a problem in itself. Should our education system really be going about things in a different way to established international norms? Maybe, but I think that needs to be proved and the default position should be international standards unless otherwise proved.

PIRLS 2006 Rock-bottom in reading, although this is against primarily developed countries (and only above Kuwait and Qatar in terms of gender inequality of reading education) (Chapter 1 and full report) (Curiously, other measures including our own Department of Education and SACMEQ studies seem to show girls outperforming boys, rather than the other way around.)

South Africa’s SACMEQ scores didn’t  change significantly from 200 to 2007 – whereas only one peer country had a reading score decline and 2 had mathematics scores decline. and 14 countries’ scores increased across maths and science. The percentage of students not sharing a textbook declined from 45.5% in 2000 to 45.0% in 2007. We are not making progress. 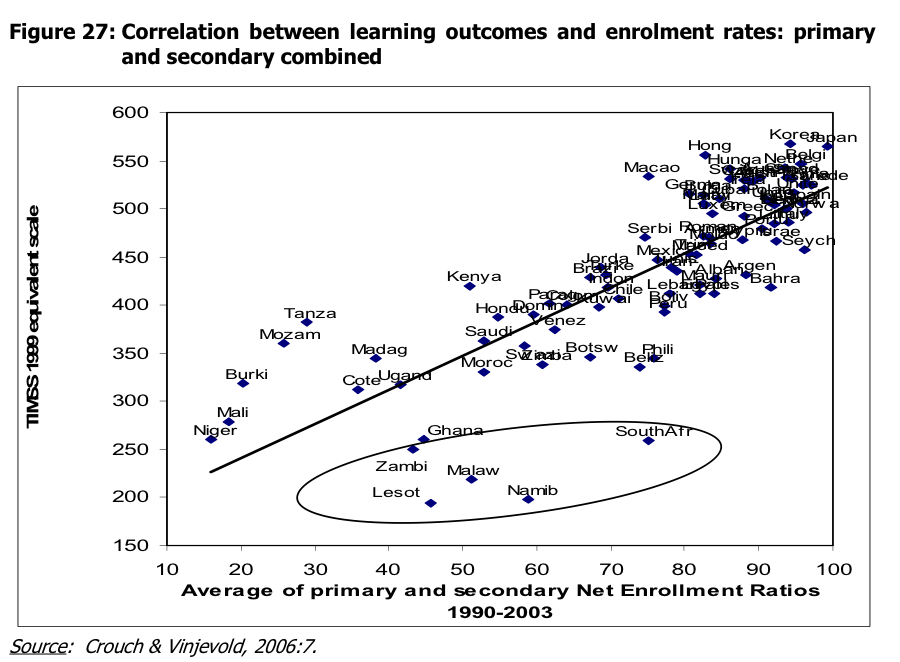 The pass rate of matric exams is a function of the quality of education (higher means higher pass rate), standards (higher means lower pass rate) and selection of learners who write the exam (restricting it to only relatively strong students artificially increases the pass rate). We should not celebrate an increase in the pass rate unless we have shown that standards of the exam have not been decreased and that learners weren’t discouraged from writing the exam. I would suggest that the standard of the test is more likely to vary from one year to the next rather than miraculous changes in education quality levels for learners who have had 12 years (or more…) of education to get there.

For example, this graph worries me no end.

This post has been more of a collection of observations and thoughts and extracts from other research. In summary: