Shocking unemployment statistics (but what do they mean?)

Someone threw a shocking figure at me today. They said that the unemployed under age 35 in South Africa comprise 75% of the unemployed population. I believe the figure comes from Adcorp.

Like many statistics that are bandied around for shock value, this one is more fluff than substance. Here’s why.

The real view of the numbers

Here’s the data from the 2007 community service.

The first thing to note is that overall, the unemployment rate is exceptionally high – this post doesn’t refute that. High, structural unemployment is possibly the most serious problem our economy faces.
However, the percentage of total unemployed below the age of 35 (ages 15-35 since those below age 15 aren’t considered to be part of the labour force) is 71% compared with the stated 75%.
Far more importantly is that the total percentage of the population aged 15 to 35 is almost as high, at 59%.
This tells an important, but less spectacular story than the original statistic. While the unemployment rate within the young age group is high (24% compared to just 14% for older ages), it is primarily the large portion of the total population in this age group that contributes to the “shocking statistic” that a huge portion of the total unemployed (71% or 75% depending on who’s stats you believe most) is under the age of 35.
The results from the earlier 2001 full census reveal a similar picture.

The lessons from this are two-fold:

Here is a graph that demonstrates the relationship between total population and the unemployed population:
It’s not absolutely straightforward to interpret this at first glance, but the “concave down” shape (negative second derivative) shows that, apart from a blip at early ages, the rate at which we add unemployed to the tally decreases as age increases.  There are proportionately more unemployed at younger ages than at older ages.
But it’s still hard to understand what that really means. This is the graph (and the statistics) we should have been looking at right from the start:
What’s clear from this chart is that, again apart from the very young ages, where we would hope teenagers would be at school or tertiary institutions, unemployment is as direct, decreasing function of age. (Age is primarily a proxy for experience, but some might argue it reflects those who were educated and apprenticed under a different system, but there is no direct evidence for this hypothesis from this graph itself).
At age 24, more than a third of our population is unemployed. That is the number we need to consider. No headline grabbing but slightly cooked numbers, just the harsh reality.
Unfortunately, there is some additional bad news. The following graph adds a curve for “not economically active” – this represents citizens who are not working, but not actively looking for work and therefore not considered “unemployed”. 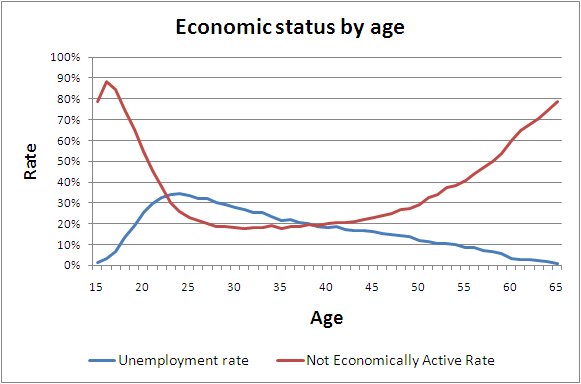 At early ages, it is good to see that clearly some citizens are studying (and therefore not actively looking for work). This is a big contributor to the low unemployment at this age. If between 60% and 90% of teenagers are not looking for work, it presents less opportunity for sky-high unemployment.
However, the interesting message from this graph is that it seems the decline in unemployment from age 40 onwards may be at least in part attributable to the increase in the percentage of our population not wanting to work, rather than a gain for experience.
It actually makes sense that increased experience doesn’t linearly continue to make one more efficient over time. (Partly because of diminishing marginal returns from experience, but also, genuinely, because we forget some of what we learnt a long time ago, and some of what we learnt is no longer relevant. Some of the sharpness and hunger for work arguably also fades over time. After all, how many 55 year-olds find jobs easily after retrenchment?)

Before we can consider gender differences in unemployment and economic status, it’s important to understand the different life expectancy of men and women:

More boys are born than girls. This graph shows that by age 15, there are still slightly more boys than girls because of this. This ratio stays more or less constant until around age 30, where it seems the ratio of men to women actually increases. This may reflect fatal complications of pregnancy and child-birth (I’m not sure). The slight decrease between ages 18 and 25 reflects the “accident hump” in mortality where due to risky, testosterone-infused and culturally enforced behaviours, more young men die than eminently more sensible young women.

However, soon after age 30, the ratio plummets as men die with significantly higher probability than for women. This, incidentally, is the reason annuities are more expensive for women to buy than men – women live longer in retirement years.

These differences in mortality and therefore life expectancy have an impact on employment. The same pregnancy and child-birth stage that potentially gave rise to a temporarily increased mortality rate for women also has an effect on employment, since some women who have the opportunity to cease working (temporarily or permanently) to raise a family do so.

The above, rather busy, graph highlights a few interesting points:

So, the decrease in unemployment overall as age increases may initially be due to experience making them more employable, but rapidly becomes a factor of women leaving the work-force initially, then followed by men a decade or so later.

It’s hard to know from this data why so many men (and women) leave the workforce in their 40s. It would seem unlikely that a significant portion of this is due to “early retirement” on sufficient savings to relax.

Are children providing for parents even at this age? Are these frustrated workers who, on being retrenched, eventually give up looking for work and become “not economically active” and dependent on grants? What does this mean for our tax burden and government expenditure on social welfare?

I’ll continue to analyse this data over time, but I think that’s more than enough for one post. Isn’t it incredible what insights and data are available when the underlying info is shared comprehensively rather than popping sounds-bites?

All figures are sourced directly from Stats SA