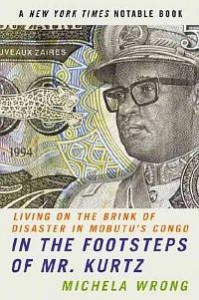 Any company, person or country looking to invest in Africa must read Michela Wrong’s book, “In the Footsteps of Mr. Kurtz: Living on the Brink of Disaster in Mobutu’s Congo” .

The book details the history of the Democratic Republic of the Congo from its pre-Stanley (yes, that Stanley) days before east African Muslim traders were replaced by European explorers through to the eventual downfall of Mobuto Sese Seko and the arrival of Laurent Kabila in the mid-90s.

The “Congo Free State” became the personal possession of King Leopold II of Belgium, the only monarch to actually own a colony. Even against the backdrop of typical colonial abuses, it seems King Leopold was a particularly nasty character, taking his Belgian subjects along for the ride even as he pillaged the depths of Africa.

As the Belgians rapidly give into an independent Congo, the story turns to Mobuto Sese Seko, the pragmatic politician who seems to be a Great Black Hope to keep the Congo together and recognise its obvious potential. Hope quickly fades to concern as resources are directed towards personal use by Mobuto to retain power and build lavish palaces. Utter lack of economic understanding and a short-term approach to problem solving that seems predicated on not allowing the creation of real infrastructure, economy, institutions or power other than his own foreshadow the spiral into utter failure. Bizarrely, the horror at the damage caused by one of the most infamous African leaders) falls away slightly to pity as Wrong paints a picture of a sickly, powerless and leadership-paralysed old man incapable of escaping the future corner he painted himself into.

The power of the book is the phases of understanding and emotion that the reader goes through as the story unfolds. Key messages of institutionalised corruption and the long-term damages of colonialism (much as Apartheid’s ills are still playing out in South Africa’s  psyche, economy and society) mingle into a sense of profound pessimism for the future of Africa.

More than read it, anyone looking to understand and invest in Africa must absorb the book’s pages into their bodies and incorporate the stories and histories in their decision making process.

It seems that the Chinese may not have read the book carefully enough. Perhaps they are prepared to roll the dice  and take their chances. The Atlantic (a US magazine dating back to the 19th century) has great coverage of the Chinese path towards a new empire in Africa.

The Atlantic article makes several references to Chinese plans to redirect the flow of minerals (and hence economic control and prosperity) away from South Africa. I wonder how well South Africa’s leaders are prepared to play this decades-long strategic game with the Chinese?

But more than that, I wonder whether the Chinese will leave Africa better or worse than they found it. Africa’s track record suggests one should prepare for another round of use, abuse and discard.