What do the names Oneway, Bull, Kansvatter, Inthemoney, The Bull! and Millionaire in the making have in common? They’re all optimistic, aggressive names used in the Make A Million competition. They’re also, as of right now, all in the bottom ten out of nearly 300 entrants and have all lost everything but a few rand from the R10,000 they started with on their chance to Make A Million speculating with Single Stock Futures. None can even take what’s left of their R10,000 and watch a Movie (except maybe at a Sterkinekor Classic, on Tuesdays, in PE).

These aren’t the unlucky few. As I warned in a previous post on how the Make A Million competition is a bad idea and encourages wild speculation and ill-advised risk-taking, the performances of the best and worst entrants is dramatically different after just two months, with rather more entrants looking at poor returns.

The highest return (so far as of about the time this blog is posted) based on the live leaderboard is a massive, impressive return of 735% in two months. That’s over a 30 million percent return on an annualised basis. That is also where the good news ends. 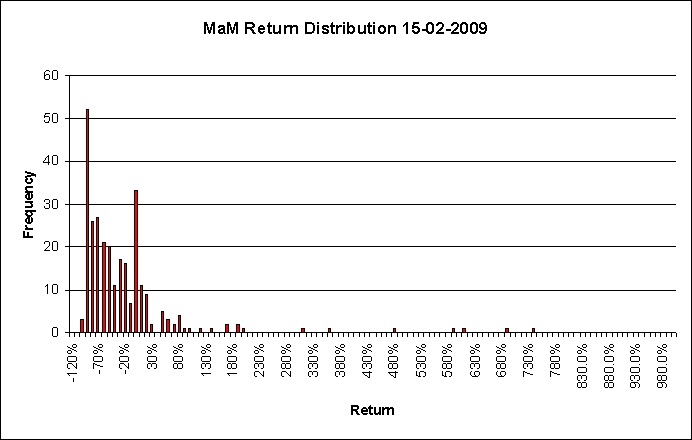 It’s abundantly clear that entrants have been massive losers in just a short space of time.  The average return translates to an annual return of -85%. Of course, the position would have looked much better had the markets boomed during the period, and it’s still possible there could be a huge rally from now until the competition ends. It’s just that I wouldn’t give any of my money to Bull! or Spitfire or Druggies or even Fantastic.

Not in a million years.